KERALA FLOODS: What causes Kerala flooding and why has been so severe?

KERALA FLOODS: What causes Kerala flooding and why has been so severe? 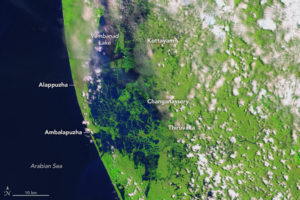 The Operational Land Imager (OLI) on the Landsat 8 satellite acquired the left image (bands 6-5-3) on February 6, 2018, before the flood. The Multispectral Instrument on the European Space Agency’s Sentinel-2 satellite acquired the right image (bands 11-8-3) on August 22, 2018, after flood water had inundated the area. The images are false-color, which makes flood water appear dark blue. Vegetation is bright green.(Source – NASA)

Heavy flooding has caused the deaths of at least 360 people in Kerala since June, the worst natural disaster to strike the southern Indian state in decades. There have also been significant fatalities in the states of Uttar Pradesh, West Bengal, Maharashtra, Gujarat, Assam and Nagaland as a result of people drowning in floodwater or killed by falling rocks from landslides, caused by running streams unsettling the earth. Abnormally heavy monsoon rains drenched Southeast Asia, leading to the worst flooding in the state of Kerala since 1924. The event, which started with rains on August 8, 2018, displaced over a million people, led to hundreds of deaths, damaged over 50,000 houses throughout the region, and severely affected 13 of the 14 districts in Kerala. While it brought the region’s most intense flooding this summer, the rain was one of many high precipitation events in Kerala this monsoon season.

About the Author: admin